The project European Youth Engagement Network 2.0 has been approved and financed within the Europe for Citizens
program of the European Union, measure 2.2 Networks of Towns. The lead partner is the Foundation “Novi Sad – European Capital of Culture”. The project lasts 24 months, from January 2021 until December 2022 and involves 16 partner organizations from 9 countries. multicultural city e.V. is one of the coopeation partners.

The aim of the project is to improve the quality of youth culture, political awareness, critical thinking and international solidarity of young people.

The first festival has already been held in Slovenia.

Within the project activities one theatre play in each partner country is produced. A total of 8 performances. The duration of plays is around 45 minutes, and after or during each performance, an interactive debate with a young audience is planned. With these performances, as a mobile festival we will tour 8 partner countries. The whole process will be filmed by an international film crew which will make a documentary.

The festivals are planned as a part of the main program of two European Capitals of Culture – Novi Sad 2022 and Kaunas 2022. This project is a developed second edition of the previous EYE.net project but with a new and wider partnership network. The first festival has already taken place in Slovenia. Take a look at photos and impressions here.

The dates of the upcoming festivals: 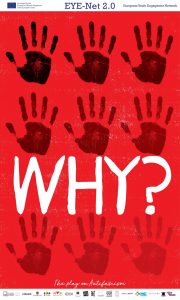 multicultural city e.V. participates with the play Why? The play shows the attack in Hanau and the issue of racism in German.

One  year  ago,  nine  people  were  murdered  in  Hanau  by  a  right-wing  extremist  perpetrator  for  racist  motives.  Nine  people  died  in  Hanau  on  the  night  of  February  19,  2020:  Ferhat  Unvar,  Gökhan  Gültekin,  Hamza  Kurtović, Said Nesar Hashemi, Mercedes Kierpacz, Sedat Gürbüz, Kaloyan Velkov, Vili Viorel Păun and Fatih Saraçoălu. The far-right perpetrator shot them  in  front  of  bars,  in  a  parking  lot  and  in  a  kiosk.  He  later  killed  his  mother and then himself.The young artists reflect the assassination by adopting different positions of friends, witnesses, victims, family members, and people who came into contact with the perpetrator. Now,  one  year  after  the  attack  in  Hanau,  many  questions  remain  still  unanswered:  How  could  the  assassination  have  happened  and  could  the  perpetrator  have  been  stopped?  The  biggest  question  mark  relates  to  the  fact why Germany, which on the one hand is so committed to Anti-fascism, is again shaken by an act motivated by right-wing extremism. 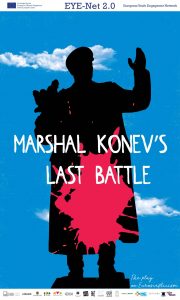 Once upon a time, between the East and the West, between the former Soviet bloc and the EU, between the past and the present, there stood – on a little square in Prague – a statue of a Russian general. Then on night someone spilled red paint all over it. What was to be done? Someone tried to brush the paint away with a scrub, someone else covered it with flowers. Somebody else yet shot the statue with a gun from a distance and
the police started guarding it. It was so that marshal Konev’s last battle
started. Who holds the power here? Will the removal of the statue change
our past? And will those garages get finally built there? The scenic collage
deals with the need to cope with the historical trauma of the Russian
occupation, Euroscepticism, and the memory of public space.

With the support of the Capital City of Prague 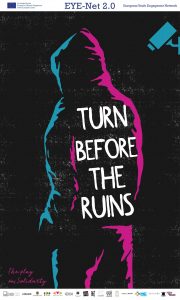 France – Turn Before the Ruins

Are we dancing on the Titanic? Our society is sick and no one can really say what it is suffering from. We want to question this illness through the prism of the public space: the
public space is the body of our society. Is the public space not slowly becoming a space that can suddenly turn against the individuals who make it up? Our show is a sensitive photograph of this public space. We want to look at it, feel it, share our fears and hopes with other Europeans. To reflect with them on this question: do we not want to see the signs of the coming catastrophe or are there no signs?
In the manner of a GPS-guided journey, we will walk through the public
space to look for traces of the symptoms of this disease; We will try to see
what we do not see or no longer see. Feminicide in the street, homeless
people dead on the ground, development of video surveillance, police
violence… but also gestures of kindness, pieces of humanities… 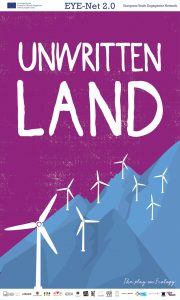 With the Hellenic landscape ravaged by wildfires, and suffering the consequences of the global climate crisis, more and more groups and individuals are seeking answers and looking for solutions. The installation of wind turbines throughout the domain has proven to be a lightning rod for controversy since its inception, with more than 20,000 turbines in over 1,500
locations currently under consideration. The centre of this debate is the mountainous region of Agrafa (meaning unwritten in greek), an invaluable natural resource that is presently being groomed as a possible location for a wind-energy park. While this would be a welcome step in our nationwide commitment to using renewable energy sources and limiting carbon dioxide emissions, the toll it would take on the natural landscape is devastating and cannot be ignored. Unwritten Land offers a unique opportunity to voice our concerns and pose thought-provoking questions, calling for active participation and cooperation across Europe. 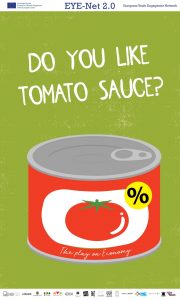 Why do we have the opportunity to use low cost high quality products? What determines the price of a product? We will cross the fields of southern Italy, among those involved in the harvest of the famous “red gold”: the tomato. An investigation into the exploitation of migrant and non-migrant labor: stories of women and men behind the homely and welcoming idea of tomatoes. 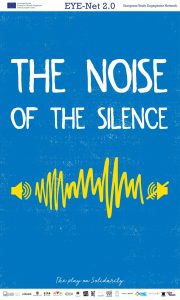 Lithuania – The Noise of the Silence

It will be a performance about the noise of the silence. A performance to develop empathy, the ability to know and understand people living in silence. We will invite the audience not only to see, but also to experience theatre, searching with the actors for a language that everyone can understand and will go down in search of their
own and others abilities. We will invite you not only to look at solidarity from the outside, but also to live it, to feel that by being together we can change and be changed. Because in theatre life helps to create and creation helps to live. 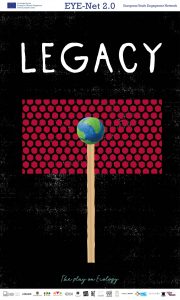 Can we destroy everything with full awareness of what is happening? Thanks to the progress of science and humanity, we will witness the end of the world. A man takes land from his children and does not worry. He treats his mother-earth as a thing that can be bought, robbed, sold like a herd or shiny jewelry. His greed will one day devour the earth and leave only desolation. Air is precious to man, because everything that is alive shares the same breath. One does not seem to notice the air he breathes. As a man who dies for many days, he is numb to the polluted and bad smell of the air. We know: the earth does not belong to man. Keep soiling your own bed and one night you’ll suffocate in your own trash. It is the end of life and the beginning of the struggle for survival. What are we willing to give up in order to stop this disaster? 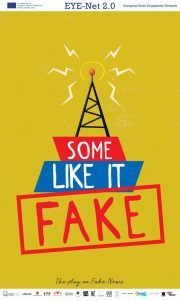 And gold is manure

We are living in the Information age. Data is the new gold. The one who
controls the data, holds the gold in their hands. Human behaviour and
reasoning analysis tell us that we are not as rational as we would like to be,
and the technological evolution handed us over the smart-mega-phone.
When does the news become fake? Who craves it, who wants it to be fake?
Why do we condemn the sin, but praise the sinners? Why is there no fake
news about fruits and veggies?

Devised performance on the topics of media, reporting and manipulation
is giving out a packet of data and information. The audience has to separate
the wheat from the chaff by themselves.